We went to Cracker Barrel for lunch today.  I thought it was a “safe” place– free from most of the triggers. But it betrayed me. While wandering through the store, I came across a display of little girls clothes. All of them with anchors.  And among the items was a little pair of shoes.  Blue.  With white anchors. And red elastic where the laces would be.  Just like Zoey’s dress.  The one she wore her first day at home. Navy Blue.  With white anchors.  And little red buttons.  It’s the last dress she wore.  The one I put on her after she died.  The one she wore as she left our home for the last time.

So instead I cried all the way home.  And cuddled on the couch with Zoey bear until I fell asleep.  And I eventually told Joe about the shoes.  And that I wanted them. Because they remind me of her in that little dress.  I went back and bought them.  Because it doesn’t matter if it makes sense. 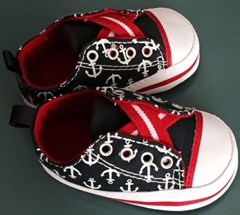