Joe and I just returned from Ocho Rios, Jamaica.  We went to the resort where we got married so we could spread Zoey’s ashes somewhere with meaning.  Here are my journal entries from those days:

We’re going to spread Zoey’s ashes today.  It’s been raining all morning, but hoping it breaks soon. I’d like the day to be as beautiful as my daughter.  I took yoga here at the resort this morning. The instructor was a stereotypical Rastafarian: tall, thin, dreadlocks to the floor.  He talked a lot about finding your peace and letting mother earth in.  It’s much harder to find peace knowing in a few hours you’ll be releasing your infant daughter’s ashes into the water.  Joe and I keep telling ourselves it’s just a ceremony. But I can’t help the anxiety and the overwhelming sadness at letting this part of her go.  And I have a million thoughts rushing in my mind: do I take pictures of the turtle urns at the beach? Do we say anything as we put them in the water?  Should I cut slits in the turtles beforehand so they sink faster or let them be?  Is it tacky to wear a swimsuit to spread your child’s ashes?  What if they wash up on shore or a snorkeler finds them before they biodegrade completely?  Is this the right spot? Am I ready to let them go?  Once again I’m left with irrational questions and no good answers.  I wanted the sun to be shining.. but like my tears the rain is still falling.

We gave our baby girl’s body back to the earth today.  Like the entire of experience of having her and losing her, it feels surreal.  A dream.  Caught somewhere between bliss and a nightmare.

We set off in a boat from the same beach where Joe and I were married six years ago.  But it’s different this time.

The two employees from the resort took us out not too far from the resort and marked the location.  One sang. Another said a prayer.  And I cried as I held onto the bag that held the turtles and the last physical remainder of my daughter.  We decided to put slits in the turtles so we could be assured they would sink and not be disturbed.  There were two so Joe and I each took one, kissed them and placed them in the water.  We watched them as they bobbed in the water for a few minutes. They disappeared only for us to see them on the other side of the boat.  Despite the rain, I wanted to stay until they both slipped under.  Eventually one began to sink and disappeared from our view. The other remained stubbornly floating.  I had no sense of time, but I know a significant amount passed and the little turtle continued to float.  I mentioned that Zoey stubbornly held on a two extra weeks from her due date so it seemed appropriate that her ashes stayed longer than we expected as well. Eventually they moved the boat closer, Joe grabbed it out of the water and we were able to put a larger slit in the bottom.  After placing it back in, it slipped easily under.  My baby was gone.

I’m sitting here on the beach listening to the waves as the sun sets.  My heart is broken. I look back at all that’s happened in the years since we were last here and I can’t believe the path our lives have taken.  I don’t regret it.  I don’t regret having her. As Joe and I were wading in the water yesterday I told him that I adored being her mom.  I know I’ve said it before, but I was never sure about having children before Zoey.  But now I’m sure I was meant to be her mom.  And I miss her so desperately.  I miss her soft little coos.  The way she’d squirm when she was hungry.  The furrowed brow. The looks she’d give us.  Those piercing blue eyes and the softest little feet I’ve ever touched.  I miss everything about that perfect little girl.

Joe said we look different from everyone else here.  You can only hide the sadness, the desperation for so long. Our swollen, red eyes betray us.

After we walked the beach for a bit (I had to ease my mind that the turtles had not washed up further down the beach) we looked out on the horizon.  Joe pointed out a rainbow “spot” — just a small little prism. I like to think it was the spot above where the turtles slipped under.  A spot of beauty– small and brief like her life but no less beautiful.

I miss you baby girl.  I love you more than words could ever explain. I hope you enjoy the sea as much as we do.  I promise to keep loving you, keep living for you.  Have fun with the turtles and dolphins and play in the waves. You’ll always be with me.

I’d hoped this trip would bring me peace.  That setting Zoey’s body free would help close the wound.  I’m not so sure I was successful.  Now it’s hard to leave. And not for the usual reasons: nice weather, palm trees, and the sea.  But because I’ve left a piece of me here. The physical remains of my daughter will always be here.  A place I can’t visit on a whim.  I like to think the water will carry her everywhere…but still…

And the time to just sit and reflect reveals more wounds.  Cracks in more than just my heart.  Everything has changed: relationships with family and friends are different.  There’s guilt.  Questions.  Our marriage has changed. Thinks I hadn’t noticed before.  And the exhaustion.  Sometimes I feel the energy it takes to resist the urge to jump from that cliff leaves me depleted. Sometimes there’s nothing left. 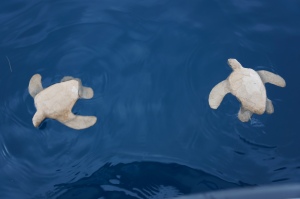 Looking out to the spot where we released Zoey’s ashes 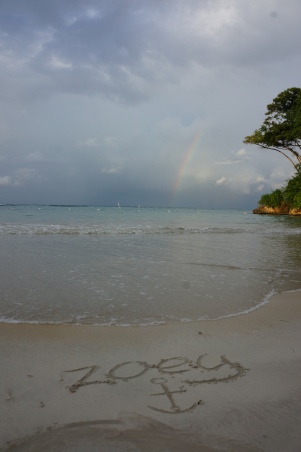 As we were writing Zoey’s name in the sand, we noticed a rainbow. It appeared to start from the spot we released her ashes. I like to think she was telling us she’s ok.  And she’s not alone. 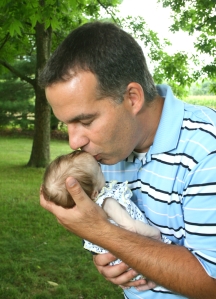 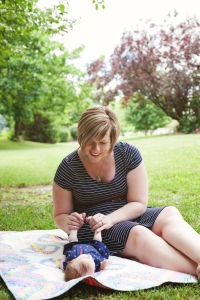