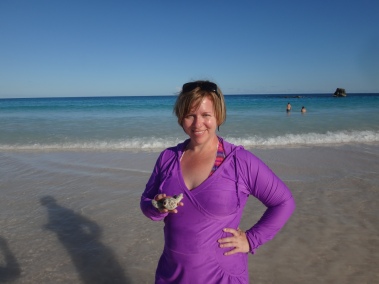 Why?  The question I immediately asked when we heard Zoey’s diagnosis.  Why her? Why us? Why this?  But after we lost her, I gradually began releasing that question.  Maybe it was simply the passage of time.  Maybe it was because I was tired of not receiving an answer.  And the reality is, there is no answer.  At least not one I could ever make sense of in this lifetime.  I’m not saying the question doesn’t bubble up now and then.  It does.  But it isn’t as consuming as it once was.  Instead my focus is on making this a beautiful life. Honoring Zoey’s life.

What heals me is an hour at the gym where I can try to regain the strength and confidence in the body that I feel has been betraying me.

It’s the sand in my toes and waves lapping at my ankles in the place where I feel peace.

It’s in realizing that the triggers will always be there, but that I can let them in, embrace them and let them move me.

It’s in holding my cousin’s little girl against my chest and kissing her head and allowing myself to love her completely even though she reminds me of everything I’m missing.

It’s in forgiving myself when it takes me time to remember the little details of Zoey’s life.  My friend has a new cat.  Fluffy, white with pretty blue eyes.  It took me flipping through pictures to remember that Marie the cat from Aristocats was one of the very first stuffed animals we bought Zoey.  It was with us at the hospital.  At first I felt like a terrible mother because that wasn’t the first thing that came to mind.  It’s remembering that this life is constantly launching things my way and it’s impossible to process everything at once.  It’s letting the memories flow instead of avalanche.

It’s in giving myself a little grace.

It’s in this blog and holding on to hope that even though I’ll never understand why we’re in this together, the other moms and I can lift each other up. Cushion the fall.  And sit in the darkness together for a little while if that’s what’s needed.

It’s about knowing she’s always with me, woven through every moment of our lives.

It’s in saying her name and telling her story.

And it’s in gradually learning that the broken pieces don’t need to fit back together perfectly.  Because the cracks allow the light to shine through.